Monsoon in Kerala is a beautiful time to be there and as my train snaked through the lush green fields and plantations the rain kept constant company, sometimes overpowering the sound of the train sometimes a quiet constant drizzle. The sun was playing hide and seek now and then and the combination of dark clouds and bright sunlit patches were presenting a picture of a photographer’s paradise in the Land of God.

This glorious journey came to an end in Tiruvalla and I lost no time to wash and change in the hotel and moved off to some of the temples in the area. The temples of Kerala have a unique character, architecture and the omnipresent discipline makes you enter one with a sense of great devotion to the lord and respect to the people around you. The main entrance is mostly just an arch or a multi-tiered pointed tile roofed structure.
In most of the grand old temples the sanctum sanctorum is in the form of a circular structure with a pyramidal dome. The prakarams are filled with coarse sand and the pathways are clearly defined with paved stones. Around the prakaram one will find the second line of deities that might include, but not limited to, vinayaga, ayyappa, muruga and more depending on the size and nature of the temple. In most of these temples the deity of the goddess will be behind the sanctum sanctorum back to back with the main deity. The presence of an elephant and a temple tank depends again on the size of the temple, but wherever the tank is seen it is beautiful and fit to have a nice dip, without soap of course. 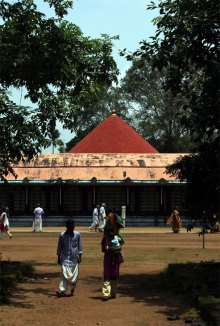 I first drove to Chengannur, to the Mahadeva Temple, just off the main road and not far from the railway station. This is a very old and sprawling temple complex with a circular Sanctum. Lord Shiva and Parvathi Devi are the main Gods of this temple. There are two main Shrines in this temple. Lord Shiva facing East and Devi facing West. The main shrine is a conical copper plated one. Devi’s main Idol is made of Panchaloha (5 metal alloy). The Shivalingam, is covered with a gold plate bearing an image of Ardhanareeswara – or the Shiva-Shakti manifestation of Shiva. The other deities of the temple are Ganapathi, Shasta (Lord Ayyappan), Chandikeswaran, Neelagrivan, Ganga, and Naagar. There is also a shrine of SreeKrishna nearby.

The temple was constructed centuries back in accordance with an architectural design evolved by the famous Perunthachan. In the 18th Century the temple complex was damaged by fire and renovated later by Vanghipuzha Thampuran except the Koothambalam (Performance Hall). This could not be restored to its original position as the structure of the Kuthambalam originally constructed by Perunthachan was in such a manner that the shadow of the performer would not fall on the stage if all the lamps were lit on each of the post of the Kuthambalam. The Mukhamandapam in front of the temple and other Mandapams in this temple are full of exquisite woodwork. Compared to other temples, this temple has a peculiarity of its own, quiet distinct. The interesting belief and festival of this Temple is Triputharattu which is considered as a symbol of fertility. This festival is connected with a menstruation ceremony, which is observed periodically in the temple. That is why this temple is also considered as Shakthi Peedam.

Four kilometers from Chengannur in the Mavelikkara road is a village called Puliyur. The lord’s name here is Maayapiran, in standing posture, and the goddess is Porkodi Naachiyar. Nammalwar and Thirumangaialwar have sung Mangalasasanam here making it one of the 108 Divya Desam Temples. As I ascended the small flight of steps to the temple dusk was falling and the sky was dark with rain clouds. As I came around the Prakaram the moon, two days before full, was breaking in and out presenting a scene of such tranquility and peace that one is convinced that this of course is the Land of Gods. The holy water here is Barajnasaras, Poonchunai Theertham and the Vimaanam is Purushothama Vimaanam. The Sanctoum Sanctorum is circular with a conical top. This temple is believed to have been created by Bheema one of the 5 Pandavas of Mahabharatha.

From here I crossed Chengannur town and took a left to reach the Imayavaramban temple at Thiruchitraru (Chitthar). If you are coming from Tiruvalla towards Chengannur, just after crossing the Pamba River the road forks into two. The left fork takes you to Chengannur and the right takes you to this temple. Nammalwar has sung Mangalasasanam here. The Lord’s name is Imayavaramban, in standing posture, and the goddess is Chengamalavalli Thaayar. Holy water is Sanga Theertham, Thiruchitraru and Vimaanam is Jagathjothi Vimaanam. Vishnu is believed to have appeared in front of Shiva here. To deliver himself from the sin of being instrumental in killing his Guru Drona, Yudhishtra is believed to have bathed in the holy water and performed poojas here. A small and beautiful temple with a temple pond, this temple is open only in the early mornings and for a while in the evenings.

From there I drove further towards Tiruvalla and at a junction called Praavinkoodu (pigeon’s nest) took a left and drove for two kilometers to visit Thiruvamundur, another 108 Divya Desam temple sung upon by Nammalwar. The walk around the large prakaram on that cloudy and partly moonlit night was amazing and will last as long as memory lasts. The lord’s name is Pambanaiappan, in standing posture and facing west. The goddess is Kamalavalli Nachiyar, Holy Water is Papanasa Theertham of the Pamba and Vimaanam is Devalaya Vimaanam. The sanctorum sanctorum is circular with a conical top as in all the temples described here. This temple is believed to have been created by Nakula of the 5 Pandavas. Narada prayed to the lord here to relieve himself of a curse from Brahmma and the lord is believed to have appeared in person for Narada and Markandeyarishi. Narada is said to have been preached by the lord here on the elaborate formalities of his Pooja rites and the connected mantras.

Tiruvalla town has many temples and the Srivallaba Temple, another 108 divya desam, is very famous. Kathakali is synonymous with this temple and I understand that even today there is a Kathakali performance almost every day in the nights. Moolavar here is Kolapiran or Thiruvazhmaarban or Srivallaban. Selvathirukozhundhu Nachiyar is the goddess, holywater is Kandaakarnam of Pamba and the vimaanam is Chathuranga Kola Vimaanam. The Kodimaram (flag staff) here covered with gold is of utmost beauty with a beautiful structure built around it. The temple tank east of the temple provides a nice dip. Sudarshana Chakra is of importance here and can be seen in a very big form. The lord here is seen with a bare chest without ornaments which as per legend is associated to a devotee, Sankaramangalathammai, who requested him to remove his ornaments so that she can see him clearly. Thirumangaialwar and Nammalwar have sung mangalasasanam here.
There are two more 108 Divya Desam temples in the area and I will visit and write about them soon. These temples are truly beautiful and the circumstances under which I visited did not offer photographic opportunities, but I intend going back again soon and you can look forward to many photos that will illustrate the temples in detail.

Now, as we drive further up north towards Chenganacheri, at Perumthuruthy the road forks into two. Take the right of the fork to reach the Thirukadithanam Temple.  the Lord here is Arputha Narayanan in standing posture. Thaayar is Karpagavalli. The holy water is Bhoomi Theertham and the name of the Vimaanam is Punyakoti Vimaanam. Mangalasasanam for this temple has been performed by Nammalwar (estimated around 5th to 10th Century CE). 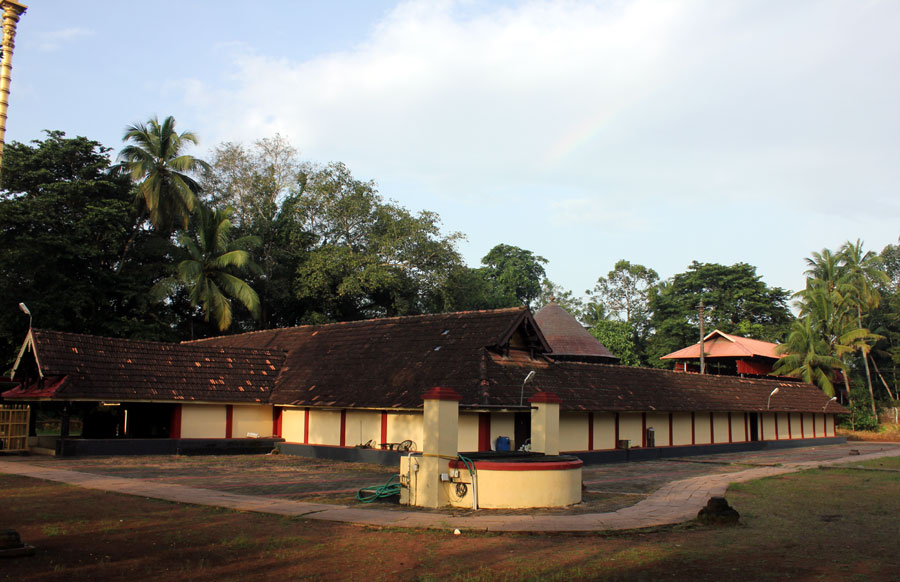