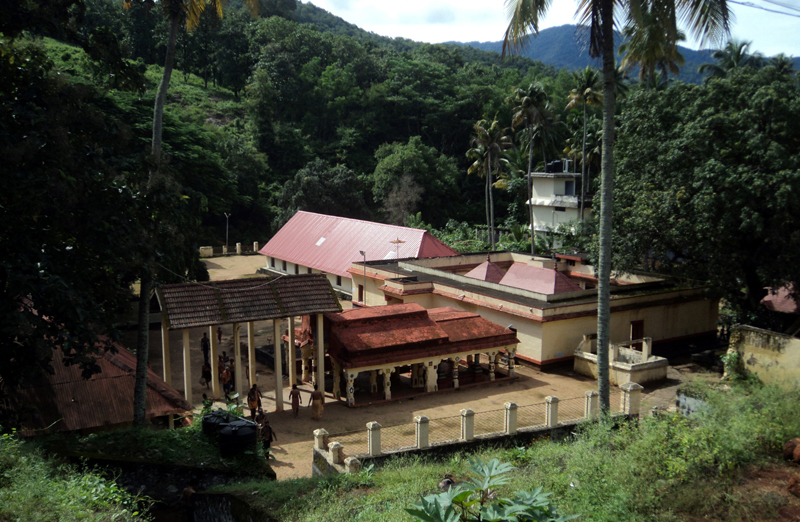 My Annual pilgrimage to Lord Ayyappa’s shrine in Sabarimala is always a very pleasant time of the year. I look forward to this festive season of october – navratri, the grand golu we keep at home, diwali in the horizon, temple visits and general fun. Our Sabarimala Yatra includes a group of about 20 close friends with a common mindset – of peace and happiness! Each year we try to take a different route to include some interesting temples on the way. This year was just great. We boarded the train from Chennai to Tenkasi after filling up our customary Irumudi at the Ayyappa temple at Anna Nagar; most of the people in the group meet almost after a year and it is always a time all of us look forward to.

Next day at Tenkasi our local friends were waiting with a vehicle and our stay was arranged at a small and nice lodge. After a simple and nice breakfast we were off to the ancient temple of Papanasanathar and Ulagammai at Papanasam. Of the nine Kailash Kshetras – Nava Kailash – Papanasam is the first and attributed to Sun God. Hence, the place is known as Surya Kshetra and Surya Kailash. Indira killed his guru Dwashta who was performing a Yagna for the demons and thus incurred the sin called Brahmmahati dosha. In order to cleanse himself of the sin, Indira wandered among the various Shiva Kshetras worshiping the Lord for relief. Upon the advise of planet Jupiter, Indira was entering the borders of this place when he got relieved from his sin. Hence, the place came to be known as Papanasam – meaning destroying sins.

Once upon a time Sage Romasa wanted to install Shivalingas along the Tambiraparani and was told by Sage Agastya to to throw flowers used for Shiva Puja in the river and install the Lingas where the flowers reached the shores – Papanasam was the first. The other temples are at Cheran Mahadevi, Kodakanallur, Kunnathur, Murappanadu, Srivaikuntam, Then Thirupperai, Rajapathi and Cherndhamangalam.

After a hearty lunch we were off to the Thirumalai Murugan Temple near Panpozhi. All of us enjoyed the pleasant weather on top of the hill while waiting for the temple to open. We always carry sweet boxes and snacks with us and the sweets were over in no time, what with the cool breeze on one side, the breathtaking views of the hills on the other side and an overall feeling of happiness and satisfaction filling all of us. This ancient temple located on a hill 400 meters above sea level was were Lord Muruga is believed to have given darshan to Sage Agastya. Lord Muruga on a peacock, life size idol of Bairavar and the Vinayagar on a tower are worthy of note here.

On our way up we had noted that Achankovil which was part of our agenda was about 21 kilometers from here and we changed our plans to go there. A beautiful and quiet drive was rewarded with one of the most peaceful Ayyappan temples one can hope to find anywhere.

Achankovil is one of the related shrines of the Sabarimala Ayyappa Lore and is situated in the middle of forests in the western Ghats of Kollam district in Kerala, complete with eighteen steps and all. It is said that the installation of the idol of Sastha might have been several centuries before the Christian Era by Lord Parasurama himself. AchanKovil is about 950 mtrs above sea level. The left hand of the idol always holds ‘Chandan’ (sandalwood paste) and Thirtha (holy water). The Chandan and Thirtha are considered to have medicinal value to cure snake bites. Here Lord Ayyappa is in the form of ‘Grihasthasrami’ sitting along with his two wives ‘Poorna’ and ‘Pushkala’. The temple is surrounded by a big wall meant to prevent wild animals entering.

A wonderful darshan and time spent at the temple was followed by a cup of hot tea in the nearby shop. Just when we all thought we have had enough satisfaction for one day, my childhood friend Suren started his wonderful singing, alone without instruments, on the drive back through the dark forests. But God had more in store for us on that day as we reached Kutralam in the night to see the Kutralanadhar temple before it closed at 8.30 pm. My son Ashwath who has been coming with me for the past five years on his own will was so amazed at the sculptures and the grandeur here that he started asking questions for which I had no answers. After this some of us went to the main falls where chill water was rushing down and started bathing and the others soon joined us seeing our enjoyment and childish thrill. A dinner of Dosas at the famous and small Ganesh Bhavan on the Tenkasi road forced us to call it a day and a group of pilgrims filled to the heart and stomach reclined in their beds at the lodge.

The next day morning I got up at 4.40 am and peeped through the window at Suren’s room to see him just awake. Both of us went for tea down and spent a long time talking away before the others were ready to go to the Tenkasi Kasi Viswanathar, Ulagamman Temple. This ancient temple is in the center of Tenkasi town and the 180 feet Rajagopuram was constructed only recently. The temple is noted for the three important aspects of ‘Murthy’ (the deity), ‘Sthalam’ (holiness of the place) and ‘Theertham’ the holy water attributed to the temple. The Sthalavriksham (holy tree) here is the fragrant Shenbagam tree and the holy water is Kasi Theertham. After a turbulent breakfast experience at Shenkottah we all crossed the border into Kerala and changed buses at Ariyankavu, another important Sastha temple. A little detour to understand the background of the Sastha temples of Kerala’s Western Ghats is appropriate here.

There are five important temples dedicated to Lord Ayyappa in the Western Ghats in Kerala including the famous Sabarimala Shrine. It is believed that these temples were founded by Lord Parashurama. Dharma Shasta or Lord Ayyappa is represented in different stages of his life in these temples. Legend has it that Lord Ayyappa passed through Kulathupuzha, Aryankavu and Achankoil on his return to Madurai with the milk of the tigress. In the temple at Kulathupuzha near Thenmala in Kollam District, the Lord appears as Balaka or child and is known as ‘Manikantan’. At Aryankavu he appears as a young man, Brahmachari. At Achankovil the Lord appears as a Grahastha with his two consorts Poorna and Pushkala. At Sabarimala, the Lord is depicted in the Vanaprastha form. At Ponnambala Medu or Kantamala, the Lord appears as a yogi and the annual Makaravilaku (huge flame) is lit here.

We thus reached Pamba and after the ritualistic bath in the flowing river we started our climb to the Shrine for the Darshan of Lord Ayyappa. I have come across a picture of the temple about 60-100 years old and though I do not have the rights for it, I am sure no one will object to displaying it here. Just compare it with the present day temple surroundings to see what we are losing out in life as time passes.